At the end of each year, I sit down with a notebook and write down my knitting goals for the year.  What patterns do I want to make?  What techniques do I want to learn?  I’ve never actually finished my list because I tend to get a little too ambitious.  As December neared and I pulled out my knitting goals that I had made nearly a year ago I decided that this year I needed to simplify.  So when I first saw the post about the 2018 Make Nine Challenge being hosted by Homerow Fiber Co. I knew that I had to participate.  Nine patterns.  Nine finished objects.  That sounded like something I could do.

Now if you’ve stayed with me this long here is my 2018 Make Nine alone with the two sweaters I plan on knitting for the Year of the Sweater.  Every pattern has been linked to its Ravelry Pattern page.

I finally learned how to make socks this year, but since my first pair were baby socks I still don’t have a proper pair of knitted socks!  I might attempt to do a Box of Socks, but the goal for this year is to simplify, so I probably shouldn’t make that an official goal.  I really like this pattern and I already stole some yarn from our next shop update that I think is going to be perfect for it!

2. Find Your Fade by Andrea Mowry 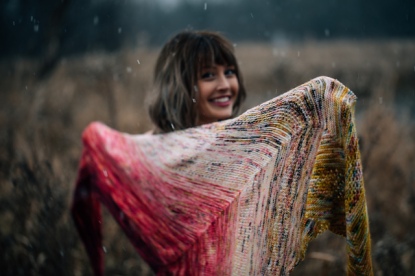 Are you all laughing at me now.  Like, Sarah, you really haven’t finished that fade already? I know, I know it should have been done a long time ago.  But, no, I haven’t finished it and I actually completely frogged it.  Why? I honestly can’t remember, but that’s why it’s on this list. 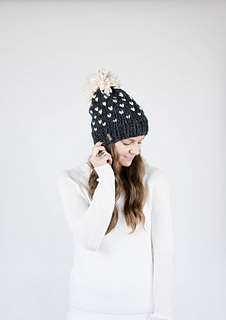 I linked to the pattern page on Ravelry, but this pattern is also available in a bundle on Etsy that has both the adult and child size patterns of this hat.  I think I am going to make these for Valentine’s Day so my daughter and I can have matching hats. Right now I’m thinking that I will make them red and white.

Can you tell that I really like Andrea Mowry’s patterns?  I actually debated for a long time if I wanted to include this on my list or not.  In fact, I had a hat pattern for my husband on this list.  However, hats are fast and easy and this is a challenge, so I should probably at least try to make it a little challenging.  Brioche is scary! It really intimidates me, but I love this shawl and I’ve wanted to make myself one for a while.  Then, when Hannah of Knitting in the Midwest suggested that we knit them together, I really couldn’t pass it up.  She has more experience with brioche and I think it would be really beneficial to have someone who is working on the same thing I am to help me along.

Every year in October my favorite podcaster, Operajo, hosts a Pumpkin MAL (make-along) with Gabby of Once Upon A Corgi. I participated this past year, but ended up hating the finished object, so I never even posted photos of it and I’ll probably just frog it. This year though I’m going to be making this cowl using the Bibbidi Bobbidi Boo colorway from Voolenvine.

I keep seeing these beanies all over Instagram and I love them!  I really want one for myself next winter.  Now to decide on a color…

A couple of years ago I got a skein of The Dowager Countess colorway from Lolodidit with the full intention of choosing two other tonals to go with it for this cowl, but I never did.  I’m still undecided on what colors I want to go with it, but I am definitely going to make this cowl this year.

8. The Weekender by Andrea Mowry

This is my real ambitious project for the year.  Everything else on this list I know I can do, but for a first time sweater knitter this one might be a little difficult.  This is also one of the sweaters that I’m going to be knitting for Skein Yarn’s Year of the Sweater.  This pattern might be a little ambitious for a first time sweater knitter, but I know that it’s a sweater that I will love and actually wear.  Wish me luck!

9. Cove Cardigan by Heidi May

Photo by The Velvet Acorn

This is my other sweater that I want to knit for Year of the Sweater.  It’s so sweet and perfect for my little one.  I’m hoping that I can make this in time for my daughter’s preschool photos this year, but if not maybe we can use it for Christmas.

Whew! Well there’s my 2018 Make Nine and apparently I had a lot to say about it! If you’ve made it this far you deserve some kind of award. This post was a lot longer than I was anticipating – so thank you for reading and sticking with me!

Are you participating in the #2018MakeNine Challenge or #2018YearoftheSweater?  Let me know what you have on your list in the comments!

It’s been awhile since we posted. We’ve made some changes but don’t worry the dye pots are still hot. Twigs + Twine Yarn can now be found in @thehandmakersbag shop. Come follow us there.
I love the way this is knitting up. The pattern is the Scottish Highlands Shawl by @knitforthesoul and the yarn is one of our Outlander inspired colorways - Thistle. The very subtle contrast eyelets are Granite Falls. There’s still a few skeins of Thistle in the shop. Just click the yarn shop link in our bio. I can’t wait to get to the lace section. What are you excited about today? - #2018makenine
This new colorway Sea Glass is making me long for a beach vacation. Who’s ready for warmer days, sunshine and walks on the beach?
Shop update is live. Lots of speckles in this update including this gorgeous blue and teal one. This is Ocean Mist. But don’t buy this one. Because I really like it and I don’t want to feel guilty when I grab it off the shelf and start knitting with it. 😂 Click the yarn shop link in our profile to see all the colors available.
Go For the Gold Mini skein sets will be in the shop today. There’s also a coordinating full skein all on our Simple Sock base. Shop Update will be today at 4;00 PM Pacific. Just click the yarn shop link is in our bio.
Wildflowers sock set coming to the shop. Shop update info coming soon. Keep watching.
Winter Wheat on Simple Sock. This yellow green skein with gold speckles would make a beautiful shawl. Now available in the shop!
No shop update this weekend, but we do still have some gorgeous skeins of Mulberry on Simple Sock! Link to shop in the bio. 😘
I really don’t need another project, but I do need a cardigan out of this yarn! Now to find a pattern and time to make it... 🤔⠀ ⠀ This is Spice on Tweed Sock and there’s still some up in the shop. Go snatch it up before I decide to cast something on. 😂